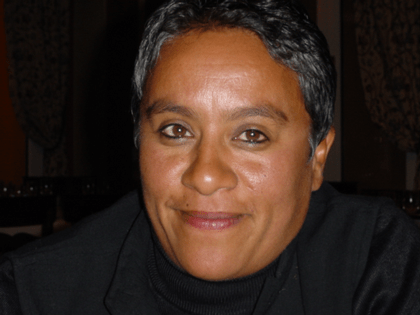 Berni Searle’s photographic, video and design projects make reference to the concepts of ambiguity and transience related to identity.  Her work can be seen as a series of explorations in progress on themes such as self-representation and personal and group identity.  Previous examples of these arguments are the series Colour Me (1998), the series Discoloure’ (1999-2000) and Snow White (2001).

While producing aesthetically impacting images, there is always a sense of concern which alters the perception of the work.  Her audiovisual projects hold the issue of identity as their primary question.  Skin colour and place of origin are two recurring elements in his work which give rise to rich visual scenes.

Since the 90s she has exhibited her works at some of the most renowned events in South Africa and abroad such as the 2nd Johannesburg Biennial (1997), the 7th Cairo Biennial (1998), where she received the UNESCO prize, the Dak-Art Biennial, (2000), at which she was presented a prize by the Ministry for Culture, and the 49th Venice Biennial (2001).