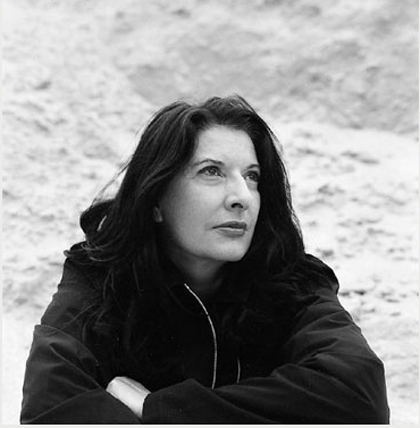 Renowned performance artist, she is one of the celebrated members of the international artistic scene. Over the last number of years her contribution to teaching stands out, in particular her workshop “Cleaning the house”, and the performances given both in her native country and the United States.
On conclusion of her relationship with Ulay, Marina presented “Balkan Baroque”, with which she won her first prize at the Venice Biennial Festival in 1997. From then on the artist of Serbian origin has continued her artistic career based above all on the language of performance.
Among her works, her presence at the 2004 Whitney Museum Biennial should be highlighted as should her project “Seven Easy Pieces” (2005) in the Guggenheim Museum of New York, where over the course of seven nights, the artist offered a series of repeats from seminars given in the 60s and 70s by artists such as Vito Acconci, Joseph Beuys, Valie Export, Bruce Nauman and Gina Pane. After 20 years without undertaking any projects in her home country, the artist returns to her roots with “Balkan Erotic Epic”, a performance in the form of a video-installation.
In spring 2010 MOMA dedicated an important retrospective to Marina under the title “The artists is present”.
During more than 700 hours the artists was sitting at the atrium of the museum inviting the public to sit with her in absolute silence.
Once a year Marina makes a résumé of the life and work experience under a work known as Biography.