“I think sometimes it is necessary to reconstruct the memory of events but, make no mistake, the art always speaks through metaphors that help us in a way that do not make other disciplines, to relocate the structures that history offers. When the statue was modeling for an artist I thought it might be a good (and complicated) exercise to think about how art is used in propaganda and how power struggles and art seducing each other ” 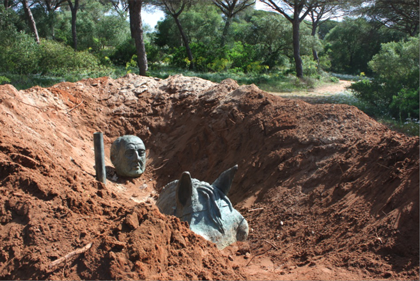 “In the beginning of this project, I wanted an equestrian statue of Franco traveled. He never visited another country, except France (Hendaye) for an interview with Hitler. In the PS1, the statue is in a sort of hollow crater. Visitors do not know if we are working to present it as an archaeological dig, if we’re trying to cover it sand or is there like a bomb crater produced by exploiting ”

Pact of Madrid”, is one of the most representative works of the artist’s career by Fernando Sánchez Castillo, he describes himself as “archeologist of history” and conduce us with his project through one of the most striking episodes in the Spanish Contemporary History.

“Pact of Madrid”, designed in 2003, marks the fiftieth anniversary of the pact signed between General Francisco Franco and the president of the United States of America D. Eisenhower. This treaty marked the acceptance of Spain to the European Union,  and the emplacement of many American military bases on Spanish territory.

This artist has developed much of his career in Holland, in his work usually addresses, symbols established a point of irony that questions the relationship between art, power and history. His work approaches to historiography, journalism or the ambiguous relationship between power and politic diffusion. Fernando Sánchez Castillo, has participated in group exhibitions in some of the most important museums and galleries on the international scene, such as the Tate Modern in London, MoMA in New York and the 50th Biennale di Venezia.

Courtesy of the artist